The abortion debate has been long, emotional and fundamentally tedious. There has been a protracted and involved argument – or series of arguments – in newspapers, talk shows, radio programmes, social media, blogs and on lampposts where the same points have been repeated and repeated and repeated until practically everyone engaged in the question could recite them by heart. 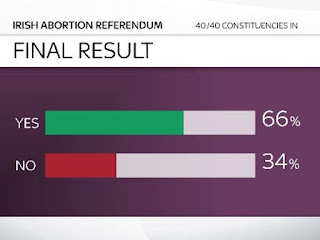 A Battle of Words

Fundamentally, the debate has been about language and terminology. It has been a battle of words. Whose words would win, whose words would people believe and accept and start using, and whose words would they make fun of and laugh at. And when it came down to it, it was about two little words, two of the most powerful in the English language; No – the ultimate negation, and Yes – the word of positivity, acceptance and affirmation.

Each side had their own vocabulary that the other side wouldn’t even use or utter. It was like they were speaking two dialects of the same language.

For the No side, the key word was “baby”. The No representatives had obviously been coached on and had practiced the correct, emotive pronunciation of the word, and endeavoured to get it into any and every conversation. Every sentence had to contain at least one “baby” – they said the word “baby” more than Barry White.

The other key words for Retainers were “human being” and “person”; the central, and practically only argument that they had was that the embryo and the foetus is “a baby”, “a person”, “a human being”.

The Yes side, on the other hand, generally avoided the B-word like the plague. They said “foetus” and “embryo”, or else focused on the pregnant woman rather than what (or who) was in her womb.

For the No side, their opponents are “pro-abortion” – or in some more extreme cases, “baby-killers” or “murderers”. They describe themselves as “Pro-Life”.

For the Yes campaign, they themselves are Pro-choice, and the other side are Anti-choice or, being kind, Anti-abortion.

Neither side uses any of the other side’s words or even acknowledges the validity of the descriptions that their opponents use. They have been having parallel conversations that don’t even cover the same ground or use the same vocabulary.

So the vote was always going to come down to a question of whose words would win. If you accepted the use of the words “killing”, “baby”, “murder” and “die”, then the No-side had you. If these words seemed extreme, absolutist, inaccurate, hysterical or preachy then there was a good chance you were turned off the No message.

It is clear that the Irish electorate has rejected the No-side’s words. They did not buy the constant, unceasing repetition of the word “baby” to describe a two-week old embryo, a six week old foetus; entities that are clearly not ‘babies”, as we know them, or in any way full “human beings”, as they made out.

And they did not accept the utter and complete inflexibility of that word – No. “No” allows for no grey areas, no compromise, no surrender. “No” means No – no to rape victims, no to women carrying unviable pregnancies, no to any woman who is not ready to be a parent. It means no debate, no discussion, no wriggle-room, and fundamentally, no compassion. It represented the old order, where you did what you were told and obeyed the words that your elders and betters said to you, because that was your place.

Basically, the No side lost so badly because they way they used words, and the words that they used, failed to convince people. In fact, the biggest ally of the Yes vote was the No campaign – it was lecturing, whiny, self-righteous, repetitive, preachy and treated people like children. They had one approach, and that was to bang on and on and on about babies, babies, babies. If someone didn’t buy the baby-tactic, then the No campaign had nothing. Absolutely nothing.

On RTE after the result had become clear, there was an indication of the gap in the vocabulary that still exists between the two sides. Noel Whelan, political commentator and Yes voter called the Eighth Amendment “monstrous” – a word of such power and accuracy that expresses what a lot of people were feeling.

Meanwhile, Senator Ronan Mullen continued to say that the Eighth was something “beautiful”. After listening to the stories of women throughout the campaign, and about all of the heartbreak that the Eighth Amendment has caused, he still felt able to use that word to describe it. It is a sign of how deluded and far from reality the No-side has been and of how utterly their words have failed them.