THIS IS NOT THE COUNTRY WE GREW UP IN.

In the RTE sitcom Bridget and Eamon, set sometime in the nineteen eighties, Bridget throws a Tupperware party. For anyone who grew up in the 80s, this would have been a familiar reference; for a few years it was briefly a craze for married women to get together in each other’s homes and buy and sell plastic containers for food. It was more than this though; it was really an excuse to socialize and maybe drink wine and gossip, like the forerunner of the book club of the two thousands. 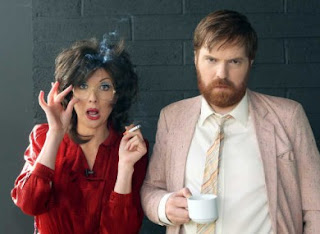 In the sitcom episode, Bridget gets a delivery of what she thinks is Tupperware, but which in fact turns out to be condoms. She and her Tupperware friends are stunned and appalled; after all, condoms were unavailable in Ireland until 1985 and it was in fact illegal to import them. After getting over her initial shock, Bridget soon discovers that the word is out in the locality that she is in possession of some rubber Johnnies, and she soon becomes incredibly popular – everyone wants some and is willing to pay. Bridget is now a condom dealer, supplying the pent-up demand for contraceptives that the infamous 1980s law created.

Bridget.And.Eamon.S01E01 from Mateusz Klatt on Vimeo.

The episode plays on the absurdity of Irish society in that dark, baggy, big-haired decade; a place where people were still devout but becoming less so, where priests were still seen as special beings; a place where people didn’t talk about sex but did do it, in fumbling, furtive ways, and a place where abortion was unmentionable and undiscussable, an abomination so foul that even thinking about it would send you straight to hell.

The place sounds alien, but in fact it is only thirty years in the past. Thirty years is nothing; less than half a lifetime, maybe one generation long, close enough that the majority of people alive then are still alive now.

In the eighties though, the pious edifice of Catholic Ireland was still largely in place. The Kerry Babies happened in this decade, Ann Lovett died in those ten years, homosexuality was still illegal; society had changed a little but the structures and laws had not significantly altered from the really dark days of the fifties. Ireland was a country struggling and twisting and wriggling, attempting to break out of the box we had built for ourselves.

I remember it. A lot of us do. Above all, I remember the feeling that things were the way they were and that change was not a realistic possibility. That the country was a place where the past ruled and where life was lived within very strict limits. Maybe that was only a personal perspective, but I am sure I am not alone. You were allowed to live in a small number of limited ways, and you had to be happy with that as there was no other choice.

Certain things then opened the dark curtain a little and let a little light through. Music was one thing; I heard the Pixies and then Sonic Youth, and everything changed very subtly. I distinctly remember thinking “wait a second, are people allowed to make this kind of music?” That was my reaction; I questioned how other human beings had got permission to be so radical, so visceral, so honest, so free. I had grown up with so many assumptions that I hadn’t realized I had, so many limits, so much repression. Something inside me was shocked that some people outside our little corner of the world didn’t seem to be constrained by the rules of behaviour that for me seemed inviolable.

Then I travelled, and realized that the best people I met had no religious beliefs. The most generous, open, creative, interesting people I knew had no time for dogma, prayer or “faith”. I was ignorant and naïve, but I wasn’t alone; we were an ignorant, naïve generation who had been brought up to think that we knew the truth and who had in fact been deprived of anything resembling insight or reality. A lot of us went abroad, and realized that we had been lied to for decades.

And the country slowly caught up. Contraception was finally made widely available in 1992 and the next year, after David Norris and others had campaigned for years, homosexuality was decriminalised – bizarre to think that it was this late.

And then we started learning about what our moral betters had really been getting up to all of this time; the laundries, the mother and baby homes, Ivan Payne, Sean Fortune, the industrial schools – the collective horrors of a country that had seen itself as above reproach when really it was guilty of some of the worst crimes imaginable.

This was the game-changer; even at the end of the eighties it was still generally accepted that when the Church claimed that it was in a position to tell us what to do, it was worth listening to. This was mainly because it controlled education and we didn’t really have any other sources of information.

When scandal after scandal, crime after crime was revealed it was like stripping away flowery wallpaper from a room and seeing that the wall was actually infested with vermin, bugs, maggots, filth; all the rotten things imaginable. It is this gap between what our native religion told us it was – and told us that we were – and the hard, poisonous reality underneath that woke up a people that had been zombified by superstition and indoctrination. It is only sad that it took the revelations of so many tragedies to shake us out of our torpor.

And now we have had this recent earthquake. Because that is – along with the 2015 referendum – what it is. In the 1980s, the idea that gay people could get married to each other and that abortion would be available on demand up to 12 weeks in Ireland would have been the stuff of science-fiction. The idea that they would both overwhelmingly be approved by such majorities, so soon after the darkness of our recent past, is beyond comprehension.

You can see this in the reaction of some No campaigners. They report that they don’t recognize the country that they live in. John Waters threatened to leave if the vote was Yes, there has been talk that the people have committed “treason” or have been fooled by George Soros. The No people believe that the nineteen-eighties are still with us, that the forces of control and superstition that they represent still own this country.

And they have been shown to be utterly and completely wrong. Our country is not what most of us thought that it was. The eighties are dead and thank fuck for that. This is not the country that we grew up in. Let us happily bury the Ireland where people had to go to Northern Ireland to buy condoms while women were being locked up for conceiving outside of marriage. Let us bury it and stamp on its grave, for all of the poison that it injected into our day to day lives. Let us celebrate this revolution – this series of quiet, and not so quiet revolutions – for what it is: a chance to wash off the nonsense and hypocrisy of the eighties and face the future with some kind of clear vision.