A GIRL IS A HALF-FORMED THING - BOOK REVIEW.

One of my first thoughts about this book was – I pity anyone who had to edit it. The style is unique; it uses short sentences, non-standard grammar and spelling, a kind of stream of consciousness that attempts to express the fractured nature of the girl – and then young woman – at the centre of the narrative. 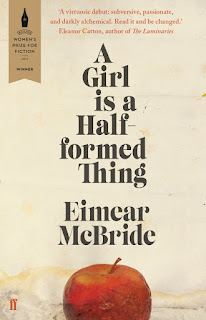 Also, there are no names in the book; we never learn what the protagonist is called though her experience is all we are given. These techniques give a kind of intensity to the narrative, but also alienate the reader a little, forcing us to look at the world we are given in a very different way to other novels – it becomes a little dreamlike and at times hallucinatory.

It is often impossible to know if the dialogue that we hear is only in the main character’s head or if it is really spoken, and there are parts where it is impossible to say exactly what is going on. It owes something to Joyce but probably more to Beckett’s novels; this kind of intense internality that attempts to let us into a disturbed, fractured human mind and to see what is going on from the inside.

The cast is minimal – a girl, growing up in rural Ireland, her brother who had a brain tumour as a baby and who is still affected by it, her judgmental, pious mother and an uncle who abuses her. There are some incidental characters that pop up, but no one of any real significance.

The plot is not exactly complex either. The girl grows up with her older brother who is teased and bullied in school. She is abused as a thirteen year old, and becomes promiscuous and wild. She finally escapes to the big city – Dublin? – to university, where things don’t really improve for her. She starts a relationship with the uncle who raped her as a thirteen year old, engages in some risky sexual behaviour, then her brother’s tumour returns and she has to deal with his slow decline and her mother’s growing resentment.

Not exactly a barrel of laughs. The more I read of this book, the more it reminded me of Hanya Yanagihara’s novel from 2015, A Little Life. In that book, the main character is abused by almost everyone he meets, and endures such extremes of horror and deprivation that it is at times hard to read.

In A Girl is a Half-formed Thing, the central character – for practically the whole novel – is immersed in self-hatred, degradation, self-harm, guilt, depression, abuse, grief and loss. It is a litany of sadness and despair with no chink of light or touch of humour. The misery is relentless and only grows towards the end, building to the almost inevitable conclusion (similar to the conclusion in A Little Life).

The writing is, at times, powerful and moving, but the utter unforgiving relentlessness of the horror and gloom is hard to take, and hard to take seriously, in fact. If a male writer put his female protagonist through what Eimear McBride inflicts on her main character, he would be asked what drove him to want to punish her so badly and accusations of misogyny would abound. The writer seems almost to take a kind of glee in ramping up the abasement and degradation of her heroine and depriving her of any redeeming element in her life, any joy, consolation or safety.

The novel has won, or been nominated for, multiple prizes, so misery lit is obviously appreciated by literary judges. The truth though, is that it is an intermittently impressive but very flawed book, seemingly concerned only with transmitting to the reader the slow disintegration of a human being, a life without solace, hope or growth.