BE DO GO HAVE; IN THE MEDIA 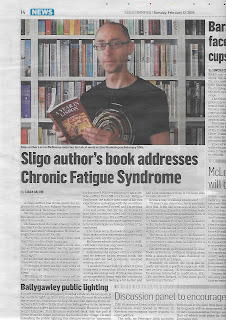 There was an article in the Sligo Champion newspaper this week about my launch and the new novel. It can be read here.

It was generally a good article, but it did focus on the ME element in the story to the exclusion of almost everything else. As it says in the article, I have had experience with the debilitating condition ME (also known as Chronic Fatigue Syndrome, as in the headline), for twenty years or more. I have largely recovered, but it has left a big impact on my life. I lost a good few years there in my thirties to exhaustion and illness and I used some of that to write the Do part of the novel, where the narrator, Kay, tells about her life with this condition.

Yet this is only a quarter of the book; it is one story of four. To read the article you would think that it was the dominant narrative in the book.

That said, I know that journalists need a hook to sell a story, and the Champion writer chose the ME story to try to get people interested, and to create a personal link with the author. And it is eye-catching, despite being a little misleading.


I was also interviewed on the arts show on Ocean FM last weekend (listen above). I had talked to Harry Keaney about my first novel and this time he gave me more than fifteen minutes to talk about the book, so it was a good, wide-ranging interview. I think it gives a concise idea of what the book is about.

The book has also received its first review. The website Goodreads is probably the main book reviewing site in the English language. The reviews there are written by normal readers, so it is a very democratic source for finding out about books.

The first reviewer of the novel on Goodreads said that "The writing and plot construction are elegant without being mannered: this is literary fiction that is still highly readable. A recommendation for anyone interested in meditation, ME/CFS, modern Ireland, or just some good new literary fiction."
I thought the review was perceptive and well-observed, and it mentioned some things that I hadn't thought of myself. It can be read in full here.