BE DO GO HAVE

I will finally manage to launch my new novel, Be Do Go Have in the coming weeks. In fact, I am doing a kind of mini book tour (very mini - it consists of two counties!), reading in two bookshops in the north-west and also in the special place that is the Yeats Building in Sligo. 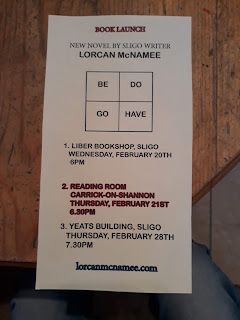 This may seem like overkill, but for an independent publisher, it is one of the only ways to sell books and engage with readers. When your marketing and promotion budget is minimal, and you don't have time to be on Twitter all day promoting your book, face to face encounters with people who might actually buy the book are invaluable.

So there will be three launches for the price of one. The first will be in Liber bookshop, the last bookshop standing in Sligo that sells new books (the second-hand Bookmart is still going too). I sold a good few copies of my first novel, A Year in Lisbon, in Liber, so the place has been good to me. This is on Wednesday, February the 20th, at 6.30pm.

The second event will be in my friend Orlagh's bookshop, The Reading Room, in Carrick-on-Shannon. This is the next day, on Thursday the 21st, at 6.30pm. The Reading Room is small but is packed with things that you would like to read, and is a great place to find interesting stuff.


Finally, the week after, I will return to the Yeats Building in Sligo, on Thursday the 28th, at 7.30pm. I launched my first novel here, so it has good associations for me. It is a beautiful, historic building, and a perfect setting to finish my tiny book tour.

The sales of e-books worldwide continue to decline, and their printed cousins are making a comeback. http://theprintingreport.com/2018/05/03/the-rise-in-popularity-of-printed-books-continues/ 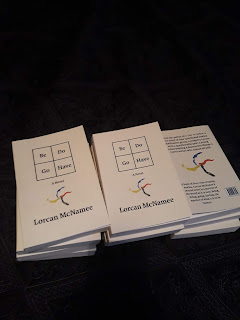 For a while, e-books were becoming more and more popular, and their rise seemed unstoppable. Things have turned around quickly in the last few years. The swing back to the printed page is easily understood. People have reported a variety of reasons for going back to the physical object: printed books are easier to give as gifts, people are worried about screen-time, books are beautiful objects in themselves and have a pleasing weight to them that makes them seem more trustworthy.

I have just published my second novel, Be Do Go Have, and today received a consignment of books from the printers. It was actually a lot more impactful to pick them up and handle them than I thought it would be.

The Kindle version of the novel went live on the Kindle store two weeks ago, but there is something that a physical book has that something that exists on an e-reader only in the form of bytes and computer code can never possess.

For one thing, a book engages another sense, the tactile, and this is significant. When you can touch something, handle it and flick through it, it becomes more real to you and you can form an emotional connection with this object. This emotional connection is not possible with a file on your Kindle.

There is another reason that I found it pleasurable to hold the physical book for the first time: for this, my second novel, I have done all of the design. I have had help and advice from Martin, the designer who did my first book, but largely the typesetting, book design and cover design – as well as the little four-colour image on the front and back – are my work. I learned to use Indesign this year, and laid the book out in this program. I wasn´t sure how it was going to work and surprisingly, to me at least, it looks really professional.

It appeals to my sense of independence; I now know that if I want to write, design and publish a book in the future I, on my own, can produce a quality product that looks as good as anything in bookshops. A few months after beginning the process of publishing, the books are already for sale in bookshops in Sligo and Leitrim. And that feels good.

A paperback book is a form of primitive but effective technology, one that has been around in its current form for about eighty years and in other forms for centuries. It is not something that is going to disappear. People are always going to want printed books, in one form or another. Mine are now here and it is a pleasure to be able to hold something tangible and physical. Seeing it in print makes it all the more real. 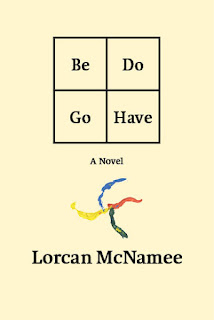 My second novel, Be Do Go Have, will be published soon. As we speak, the PDF files are on the system of a printers somewhere in the UK, being converted into printed paper and coloured card, ready to be shipped back to Ireland and sold as books. It is a relief.

The actual writing of the thing didn’t take that long – probably a year or a year and a half, all in, once I got going – but it is the editing, the typesetting, the cover design and finishing touches that are time-consuming. I am still learning how to do all of this, so the actual production is slower than it could be.

For my first book, I outsourced the typesetting and cover design to a graphic designer that I trusted, who did a good job and produced a cover that I was very happy with. This time, though, I was determined to learn how to do it myself. My designer gave me some lessons in Indesign and I set about trying to grasp the ins and outs of the programme. I have learned a tiny fraction of what Indesign can do, but it was enough to put together a rudimentary cover, part of which can be seen above. In another iteration it was more complicated and busy, but I have since simplified it, and am now quite happy with the result.

The book started one evening when I was reading a passage in a book about language by Stephen Pinker. As a language teacher, the part about the centrality in every language of the four verbs; Be, Do, Go and Have, caught my attention. And then my writing brain kicked in…..

“The verbs be, have, do and go are…… the most commonly used verbs in most languages and often pitch in as auxiliaries: “helper” verbs that are drained of their own meanings so that they may combine with other verbs to express tense and other grammatical information…. Many language scientists believe that the meanings of these verbs – existence, possession, action, motion – are at the core of the meanings of all verbs, if only metaphorically.”

The phrase “the core of the meaning of all verbs” immediately made me sit up. “Existence, possession, action, motion” kind of sums up what it means to be a human being. We are, we act, we have, we move. What else is there?

From there came the idea of a story to go with each verb. Four verbs, four stories, four characters, all told in the first person, their lives criss-crossing over and back, into and out of the other stories, attempting to form a tiny picture of what it is like to live on the planet Earth in the year 2018, with all of our being, doing, going, having.

So I started writing……..