It is dark;
the next time we see the light
it will be nearly Paddy’s Day. 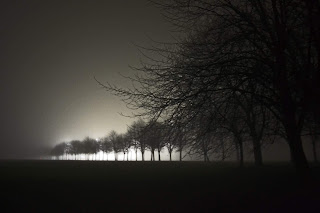 The cave of winter
is solid and without cracks;
the dark has a physical substance
that you can almost hold;
I feel sure that I could go outside
with a bottle and put some in,
ready to take to a far off place
that needs a little darkness,
somewhere baking under
oppressive sunlight.

The dark is a blanket that covers,
it is a barrier that keeps stuff out,
a lid that closes us in.
Light is the thing that exists -
in waves and particles and rays and shafts -
and darkness is just light’s absence,
but sometimes,
deep in the cavern that is the Irish winter,
the dark is the only thing that really is.
Light is the aberration and its opposite
is the natural order of things.

The dark does not care about us;
it is vast, like the ocean,
and just as full of contempt for
all of our mess and hassle and
lack of light. The dark is a
creature that does not eat and does
not breathe, but which occupies space like
a malevolent gas. The dark has
no tentacles, but it feels like it does.
The dark covers and hides
and blankets the world in negative space,
like anti-matter, a creeping vacuum.
The dark is a negation,
an absence, a nothingness that
sucks the vibrant hope from the world.
The dark does not hate us;
it is worse, it does not care if we exist.
Our wounds and cravings
and loss do not matter to
its fixed, merciless expanse.

I hang on, and wait

Suddenly, the world is water.
The air is displaced by liquid
and we are breathing rain.

I am warm yet saturated,
dripping and sweating.
My shoes, two sponges.
I am thankful that I have skin
to keep out the water that
is trying to get in,
beating insistently on my human surface
like photons from a sun.

In thirty minutes there are floods,
streams, where before there were none.
The roads are now rivers,
flowing with currents and tides;
a torrent that wants to eat
everything in its path.
This dry place, unused to such
a deluge, cannot cope
with an assault like this.

The water knows that it only
has the run of the place for
a few hours,
and so runs wild,
like a child in a toyshop,
aware that it could be months
before it is allowed back

to this parched land.


They stole my bike


They stole my bike (the motherfuckers);
One week in the city and I come back,
one afternoon,
to find that all that was left
of my Carrera Crossfire
was a snipped cable,
lying dead on the ground
like a sliced snake,
And the faint shadow
of the bike’s essence;
Two ghostly wheels,
an imaginary frame and
a carrier that was not really there.

They stole my bike (the motherfuckers);
My ass had spent hours
on that saddle,
moulding it to my shape.
In the pannier on the side
I had had my winter gloves,
a half bottle of water,
a book token
that still had €7 on it.
Something tells me that
the gurriers that took it,
would not be using the token.

They stole my bike (the motherfuckers);
after six months of hardly
walking anywhere,
I now have to measure distances
in half hours, not
small multiples of five minutes.
I move my legs and wonder why
it takes so long to get places,
why I can no longer coast down hills
or use sixth gear
or weave in and out of traffic.
I am reminded of
how much walking sucks.

They stole my bike (the motherfuckers);
They are now in possession of all
of the strange vocabulary of
the bicycle world;
My spokes, saddle, mudguards,
gear cables, handlebars,
brake pads, USB lights,
bicycle bell, twenty one inch frame,
black, plastic pannier.
They now own these words
and the things attached,
while I am left with
an orphan helmet,
and a lock attached to nothing.

They stole my bike, (the motherfuckers);
As if it was theirs to take,
as if private property was an illusion;
a bourgeois concept to keep
the working class down.
It may have been an
ideological act,
a redistribution of wealth,
socialism in practice.
Or maybe they were just
scumbags.

They stole my bike (the motherfuckers);
In the station, the guard said that
I had no hope of seeing it again,
that I should accept that it was gone.
I nodded, resigned,
but felt like asking,
why the forces of law and order
were so powerless
in the face of a teenage skanger
with a wire cutters.
“Shouldn’t there be a sting operation”,
I wanted to know,
swat teams, special forces,
The Coast Guard, the Garda
helicopter. Where were
the emergency response team,
the Army, the sub-aqua unit?
“Get your best men on the case,”
I wanted to demand,
“don’t you realize
that they stole my goddamn bike?”

They stole my bike, (the motherfuckers).

My phone is only
At 36%
Which is far
Too low for comfort.

I need to charge
But the tablet
Is right now
Plugged in
And getting juice
From my one good charger.

It is a worry,
A concern,
A tickling preoccupation;
I do not like it
When a device falls
Below 50%.

My kindle is short too
And the iPod is demanding
Feeding, and the laptop in the corner
Has not been plugged in
For hours.

I spend my days
Checking battery life,
Charging or
Worrying about charging.


Disintegrates in my hand.

I was driving back from Ballina to Sligo one evening last year and noticed some of the scenery on the way, which was spectacular in the growing sunlight, as the clouds cleared away.

Out of the gloom appeared Knocknarea, which is unmistakable with the little pimple on its summit. I had never seen it from so far away before - there were at least thirty kilometres to go before I reached Sligo.

I have lived near this hill for most of my life, but this view of it was something I had never experienced before. It was so grand there, so solid and sure of itself. A new perspective on a familiar landmark. 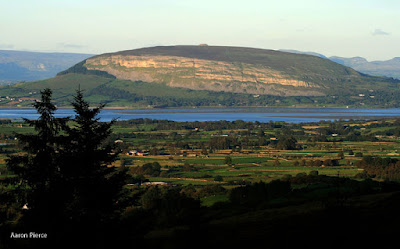 Heavy all day,
The clouds part and scurry off,
The curtains of the sky
Have opened.

Knocknarea appears
And is clearly visible,
Though there are still thirty Ks to go.
The Queen’s hill is a button, a blister,
Sligo’s nipple;
An unmoving nub
On the landscape.
A scab you just want to pick.

I have lived near it most of my life
But have never seen it
From so far away.
It is so grown-up looking;
Up close, it is an adolescent mound,
A childish swell of rock
That is barely a mountain.

But seen from Enniscrone, Easkey,
Dromore West,
It is little but grand,
An ancient dwarf,
Dignified in its insignificance.

I had the misfortune recently to have to look for a new car, as my own died a very sudden death. It had been four or five years since I had had to go through this, so it was an eye-opener.

There is a whole different kind of language used when talking about cars, you almost have to learn a new vocabulary, which you will probably not use at any other time of your life. The people you meet talk about cars all day, every day, so they are already in on the lingo.

In rural Ireland, there is a tendency to pronounce some words in different ways - the name Walsh, for example, is pronounced "Welsh" in many parts of the Irish countryside, for no really good reason.

This is also true of the car manufacturer Renault, which many people pronounce phonetically, as if it were an English word. This is to explain a little of the following - very short - poem. 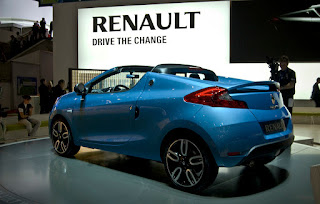 He called all vehicles “she”
And pronounced Renault
As Ren-alt,
So I was immediately sure
That when it came to cars,
This man knew
Exactly what he was talking about.