SELFIE is a defining book for understanding the way the world is at the moment and why human beings are the way they are in the early twenty-first century.

In this year, when the most narcissistic person ever elected to high office is running the most powerful country in the world, Selfie aims to look at the concept of “the self”, where it comes from and why the western world is so self-obsessed. 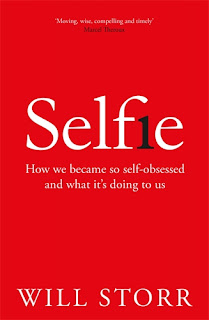 The writer, Will Storr, begins back in Ancient Greece. It was here that the idea of perfectionism first took hold; a person was capable of perfecting themselves by their own efforts. The Greek myths all feature heroes and heroines who stand or fall by their own actions. Storr says that we have inherited this tendency to self-mythologize… “the brain is a storyteller and it’s also a hero-maker – and the hero that it makes is you.”

We tell ourselves stories that paint ourselves in the best light – we construct our “narrative identity” to describe to ourselves who we are.

This, he contrasts with the Eastern way of looking at the world that essentially comes from the Chinese philosopher Confucius. In Western stories, beginning right from the hero-obsessed Greeks, the goal is for the protagonist to achieve riches, the love of a beautiful woman, respect from his fellows.

In stories from Asia, the goal at the end of their stories is “harmony”. There is no great lesson at the end of a story, no profound conclusion, the reader or listener is invited to view the narrative from various perspectives. And if there is a hero, he or she is heroic because they have sacrificed themselves for the common good.

The writer then moves on to the self-realization movement which was based in California in the 1960s and which has given us the concept of “self-esteem”. It is hard to believe, but the term “self-esteem” did not really exist before a collection of new age psychologists got together and invented it, fifty or so years ago.
Eventually, love of self was being proposed as the panacea that would cure all of society’s ills. Promoting self-esteem was seen as the thing that would prevent all kinds of psychological and social problems.

However, it turned out that promoting self-esteem among people was not always of benefit. Some people had naturally high self-esteem anyway, and promoting this just led to that most modern – and most Greek – of failings: narcissism. Too much self-esteem makes people self-obsessed and narcissistic.

Moreover, one of the key points that the book makes is that “there is no authentic self.” Will Storr undermines the whole self-esteem movement and the neo-liberal preoccupation with self-reliance by quoting Professor Bruce Hood, who says that “we actually contain a collection of bickering and competing selves.” He goes on to claim that there is no pure, god-like core to each one of us; “the ‘I’ is not one, it is many.”

The book continues on a journey up until the modern day; through Ayn Rand and the Neoliberal political movement that is so influenced by her writings – government interference in society is malign, individuals should be left to manage their own affairs – as Margaret Thatcher famously said, “there is no such thing as society.”

This political project sees the individual as king and self-actualization as within the grasp of any human being. In short, if you are poor or sick or dysfunctional it was because you don’t have the drive and ability and desire to make yourself better. You should not rely on others or on governments for help; people have to forge their own path, they have to solve their own problems. If you have failed, it is your fault.

To counter the whole neo-liberal world-view, Storr makes the point that we are profoundly social creatures who have “evolved to thrive in communities.” The ideal human, according to followers of Ayn Rand and the neo-liberal project, is the self-sufficient individual, in charge of his or her own destiny, autonomous and independent (like the cowboy, roaming the range). Yet this idea is undermined by the fact that we have always existed in tribes and families and communities, and have always depended on others for help.

And now we have reached the age of social media where most people are selling or communicating an idealized version of themselves. This is the time of the Selfie – the camera pointed inwards, the outside world ignored.

Girls is a HBO television show set in contemporary New York where every single character is mired in self-obsession, in one way or another. Elijah, one of the central characters, comments, some time in season three; “I just realized that I got so good at taking selfies that I wasn’t feeling challenged anymore; then I thought what would happen if I turned the camera around.”

This focus on the self is, according to the writer, dangerous. The idea of the perfectibility of the self can lead to perfectionism, which in turn can bring us to feeling like failures if we don’t measure up to our or society’s ideal of perfection. He interviews a number of people who have attempted suicide, all of whom cite their inability to measure up to expectations as a reason for trying to kill themselves.

The writer of the book, Will Storr, has had his own struggles with depression and lack of self-worth, which drove him to write this book exploring some of the issues that touch on him personally. He comes to a number of tentative conclusions which are some of the profoundest, yet simplest, ideas possible. One is simply that we need to accept ourselves as we are, in all our imperfections.

“One of the dictums that defines our culture is that we can be anything we want to be”, the writer says, yet this is “the dark lie at the heart of the age of perfectionism.” The answer is to realize that “you’re limited. Imperfect. And there’s nothing you can do about it.”

He finishes with some wise words – “none of us are heroes; not really. We’re just us.”